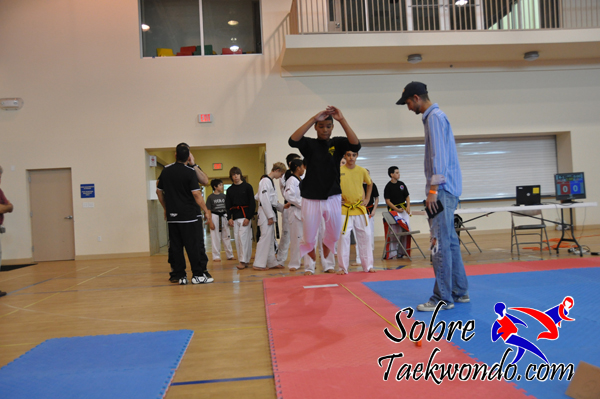 This study presents regulations meant to detect talents in taekwondo. It is based on several tests applied to Junior Mexican Taekwondo National Teams as well as an analysis of height in Junior and Senior Olympic Champions. These regulations have served in our country for the detection of sport talents, thereby achieving have successful athletes in international events and positioning Mexico as a world power. This is the first specific regulations for our sport that have been validated with the best athletes in Mexico

The programs for Sports Talents and National Reserves in Mexico are essential for creating a solid base of high performance athletes, which is why it is crucial that those participating in them have specific characteristics according to the sport they practice; in this case, Taekwondo.

Coaches, as the main actors in the development of these programs, should select and look after the right athletes. Because of that, this proposal comes from the present need in the country of standardizing all the information regarding the formation of high performance taekwondo athletes. Thus, methodological guides are established for the first time in Mexico meant to help coaches optimize the process of selection and follow-up of those kids who comply with the previous requirements to be considered “talents”.

It is important to consider at all times, while applying the contents proposed in this article, that every athlete evolves and matures on his or her own way, and that each sport and divisions determine different requirements. Therefore, it is fundamental to optimize the process of detection of children who comply with the specific characteristics required in order to be considered taekwondo athletes aimed to high performance.

Presented in this article are also the procedures for the application of tests that will provide physical parameters to locate the evolution of the taekwondo athlete during his or her formation.

Hopefully, the effort put into this proposal related to the formation of taekwondo athletes results in one of the first steps taken to strengthen the sport’s preparation system in Mexico.

We consider a sports talent an athlete who is located between the phases of basic initiation and specialization in sports that presents characteristics and/or standards regarding somatotype, cognitive abilities, physical and functional abilities, as well as the technical-tactical ones required for taekwondo, including compliance with the World and Olympic requirements demanded at those levels. On the other hand, we identify as a national reserve those athletes with physical, physiological, and technical-tactical conditions who have had positive results at National events, which makes them members of the Junior and Senior National Teams.

In making this study, our goal is to guide coaches who are part of the Sports Talents and National Reserves Programs by explaining how to comply with the regulations for a taekwondo athlete’s formation based on attainable protocols that will measure the level of physical performance on each phase of the athletes’ formation according to the technical specifications of the National Olympics.

Nowadays, Mexican taekwondo has had a lot of success in major international events, in cadets, junior, and senior categories. Up to now, our sport has Olympic, world and Pan-American medalists, among others.

The latter points to the need of a more in depth systematization on the formation of high performance Mexican taekwondo athletes. In México, taekwondo has had an exponential growth in such a way that in the most important national competition, called the Olimpiada Nacional[1], 1600 athletes of 35 states participate in the final phase.

Hence, this investigation presents methodological guidelines with the purpose of forming taekwondo athletes oriented towards accomplishing the highest results in events of the Olympic cycle as they transition to higher levels.

It is well known that high performance is a long-term process divided in different development phases, each one concatenated and arranged in sequence from the next, with perfectly defined objectives.

Each phase of development by age has physical regulations and methodological guidelines for a technical, tactic, and physical preparation. It is a requirement for coaches to interiorize the content of each phase of development and for it to be clear that although the different ages pointed out in this document already compete for medals in the national Olympics, and these medals come with an economic reward from state governments, we must not forget that these are phases of sports formation, thus being partial to the total time of the athlete’s career since the expected final result is an Olympic Games medal.

The following table (1) shows the height of every winner of every division on the London 2012 Olympic Games.

From this table, we may identify that current Taekwondo is oriented towards height as a conditioning variable of result in a competition; the latter answers to diverse changes in regulations, fostering a greater reach in competitors. This situation is not exclusive of adult competitors; if likewise, we analyze the size of juvenile competitors who participated in the Youth Olympic Games 2014 where we may observe a considerable height in every weight division as shown in table 2 and 3.

Table 2. Maximum and minimum average values for male athletes in each division of the Youth Olympic Games 2014.

Table 3. Maximum and minimum average values for male athletes in each division of the Youth Olympic Games 2014.

From the latter, one may infer that the average height for the men’s category throughout the different divisions of weight for the medalist athletes in London 2012 is 1.86 m, whereas for the female category is 1.72 m. It may also be inferred that within the total of weight divisions in juvenile Olympic competitors, winners were taller than the average of the group; also, in the case of men’s category in three out five divisions the tallest competitors were also the victors.

Therefore, we propose charts of correlation between height and weight division according to the Technical Annex of the National Olympic.

In Mexico, there is a relationship between the categories described in this manual with ages and school degrees as seen on chart 1.

Chart 1.  Stages of academic formation for Tae Kwon Do students in Mexico.

In regards to the last chart, this manual will discuss two formation phases in taekwondo athletes: the 10-12 year-old phase and 13-15 year-old.

Characteristics of Athletes between the ageS of 10 and 12

Athletes between the ages of 10 and 12 years old become aware of no longer being kids when they notice important physical changes on them. Their brain still thinks as that of a child, but their bodies start working as one of an adult. This may vary on each child, but starting from this point their bodies and movements will become clumsy as because of the changes they are undergoing.

The end of childhood always becomes a challenge for every kid. They will start to create their own identities; because of this they will start breaking away from their family group, even though this varies on every child.

During the phase of growth motor tasks possess the following traits:

Weight Divisions of Athletes between the ageS of 10 and 12

Table 4. Weight categories according to the National Olympics’ technical specifications are as follows[4]:

Table 5. Relation between height and weight for taekwondo athletes between the ages of 10 to 12

Results come from previous evaluations done to different National and State Teams. The following methodological regulations are meant to guide the physical preparation of taekwondo athletes based on these values.

Table 6. Physical Parameters for taekwondo athletes between the ages of 10 to 12

Characteristics of athletes BETWEEN THE AGES OF 13-15

This age is characterized by the beginning of adolescence. It is marked by many physical, mental, emotional and social changes. At the beginning of this stage (called puberty) there are many hormonal changes. In the majority of the males, pubic and facial hair appears, and their voice deepens. While in the females, pubic hair appears, breasts grow and they begin menstruating. Pre-teens may become worried by these changes and the way other people see them. It is also a period in which athletes could feel pressure while introduced to alcohol, smoking or drugs by their friends, as well as being convinced into having sexual relations. Other challenges that they might encounter are eating disorders, depression and family issues. At this age, athletes rely on friends, sports and school when they take decisions. They become more independent having a personality and interests of their own, even though parents are still important at this stage.

Characteristic aspects of the athlete´s development between the ages of 13 to 15:

The girls’ annual growth decreases and generally stops at the age of 15. Approximately, between the age of 14 and 15 the growth spurt occurs. At 15 years old, males become different from females in height and weight.

Studies have shown that females grow until they are 17 years old, beginning on average to menstruate at 13 years old. Males on the other hand keep growing until they are 19. Strength exercises must increase as soon as they become biologically mature.

Coaches must know that before working with sports talents many aspects should be considered such as: an understanding of each athlete´s constitution based on their biological age, the nutritional need to replace the energy expenditure as well as that of physical activities and stage of growth, and the basic qualities that must be developed in each stage with the proper planning and methods of training.

On this stage, the main taekwondo international competitions are the Central American and Caribbean School Games, the Junior World Championships and the Youth Olympic Games.

Weight Divisions of Athletes between the ageS of 13 and 15

Table 7. Weight categories according to the National Olympics’ technical specifications:

Matches for these divisions will be of 3 rounds, 2 minutes long with a 1 minute break between rounds (3 x 2´x 1´)

Table 8. Relation between height and weight for taekwondo athletes between the ages of 13 to 15

The Albergues Escolares[5] (School Shelters) protocol will be used to measure height and weight using the following procedure:

Weight measurement technique. The equipment must always be prepared before the measurement. Avoid the use of bath scales or similar equipment because springs lose elasticity with use.

Set the weigh beams on zero, for this you must remove any object from the surface of the scale (platform). If the child will be measured over a mat, lay the mat first and then set to zero. Use the fitting screw and the fitter until the scale’s arrow is set on zero. (Fig. 1) 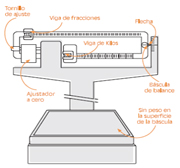 Next, prepare the child to be weighed or measured.  Before the child climbs on the scale make sure there is not extra clothing, such as sweaters, jackets, hats or caps; nor money, keys, or other heavy objects in their pockets that may increase the weight. The measurement should take place preferably before food intake or after bowel movements.

The scale must be set in a flat, horizontal and firm surface for any weight measurement. Make sure the scale works properly and exactly before you start. 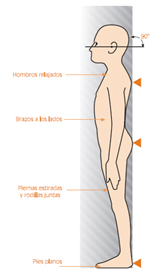 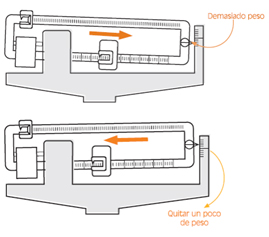 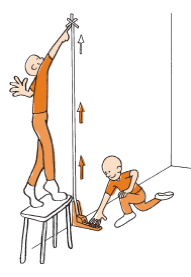 Before making any measurements, the child must remove any footwear or headwear, make sure their hair do’s such as ponytails, etc. do not tamper with the measurement.

The person measured must be standing up and free from any head accessories that hinder the reading.

Fig. 6 Place the subject to carry out the measurement

In the acceleration zone, without stepping on the line, the runner will start with the aim of reaching the maximum speed when reaching the 50-meter finish line.

For aerobic resistance, a 1000m run against the clock will take place on a 400m track.

The athlete stands on a step, toes at the end of the step, and flexes the hip without bending the knees; fingers must be outstretched and one hand lying on top of the other; hold position for 3 min with maximum flex.

[1] The Olimpiada Nacional is the main sports competition that gathers around 200,000 athletes of diverse disciplines during the final national phase.

[2] The goal of operational thinking is to solve real problems with real actions.

[3] Formal and Logical thinking involved relationships between objects and develops from the individual’s own elaboration. It arises from previously created coordination between objects.

[4] Technical Annex of the 2014 National Olympic Games , taken from: